Adhering to the 8th-generation LTO Ultrium* standards for magnetic tape storage media, the LTO8 will allow for backup and archive of large-capacity data, using the barium ferrite (BaFe) magnetic particles with its outstanding recording/retrieval performance and long-term durability. It offers a storage capacity of 30TB (12TB for non-compressed data), twice the capacity of the previous generation**. It is also capable of transferring data at 750MB/sec. (360MB/sec. for non-compressed). With its ability to provide secure and long term storage of massive data at a low cost, LTO8 responds to the increasing demand for data storage. 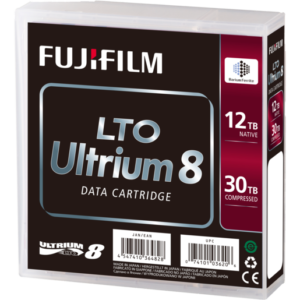 The amount of data generated worldwide has exponentially increased in recent years with the expansion of high-definition 4K and 8K video, development of IoT and ICT and the utilization of AI for Big Data analysis. This includes “cold-data,” or data that was generated a long time ago and rarely accessed, and is estimated to account for more than 80% of all data. As the utilization of accumulated data, including cold data, rapidly increases, so does the need for reliable and cost effective long term storage of such data for future use. Magnetic tapes have been used among major data centers and research organizations for many years as magnetic tapes not only offer large storage capacity, low cost and long-term storage performance, but also create “air gap” data protection, physically isolated from the network, which minimize the risk of data damage or loss caused by cyber attacks. In the future, magnetic tapes are expected to be used in cutting edge research fields where generate a large amount of data, such as AI / IoT-based smart manufacturing to achieve high-quality and highly efficient production, and future connected cars.

With LTO8, Fujifilm has further developed its unique “NANOCUBIC technology***” to produce even smaller BaFe magnetic particles than those used in the LTO7. The magnetic particles are separated by highly controlled dispersion process and the tape surface roughness is controlled, achieving smooth surface of magnetic layer with enhanced NANO coating technology. In this way, Fujifilm has increased the storage capacity up to 30TB (12TB for non-compressed data), twice the capacity of LTO7, high speed data transfer reaching750MB/sec. (360MB/sec. for non-compressed data). Furthermore, appropriate material design has allowed for high tracking performance and durability for the magnetic heads in the tape drives, boost reliability showing stable and excellent performance.

Since the launch of LTO1 in 2000, Fujifilm has consistently developing high-performance and high-quality magnetic tapes with large data capacity. As the world’s top*4 manufacturer of magnetic tapes for data storage, Fujifilm will continue to develop and supply high-performance and high-quality media and services that satisfy customer needs and expectations, thereby helping to solve social issues.

(2) Advanced level of convenience and reliability